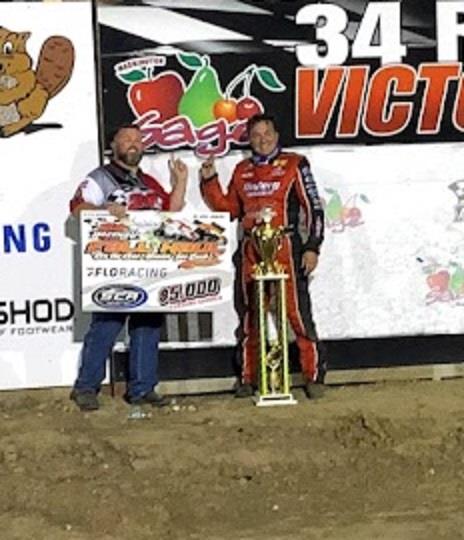 (Bill W) West Burlington, IA, September 26, 2021 – Terry McCarl was on his game Saturday night at 34 Raceway’s Sprint Invaders “Fall Haul” in West Burlington, Iowa. The National Sprint Car Hall of Fame inductee collected $5,000 for his win and a $250 bonus in his second career Sprint Invaders win at 34 Raceway, and his thirteenth win overall with the series. Jonathan Cornell’s podium finish nailed down his first series title, and Scott Bonar claimed the car owner championship for his #50 team.

Thousands of dollars and contingencies were provided by dozens of entities to send most of the drivers home with a bonus of some kind. Chris Martin won the Terry Jamison Memorial Dash to conclude the night. It was worth $500 to the Ankeny, Iowa driver.

The 30-lap feature got off to a bumpy start for several in turns one and two, but it was Austin Miller who would eventually stop and retire. Martin would lead the first lap of the feature over McCarl and Garet Williamson before Colton Fisher would get upside down to conclude a top night for him. Mike Johnston would also be a part of the incident and continue sans nose wing.

McCarl would shoot to the fore on the restart. The leaders remained the same, while Josh Schneiderman and ninth starting JJ Hickle swapped fifth. Williamson would use the low side of turn two to take second from Martin with the leaders entering lapped traffic on lap seven. Hickle would work by Gunner Ramey for fourth before the caution flew for a stopped Alex Vande Voort eight laps in.

McCarl extended his lead on the restart and headed back into lappers by the halfway point. Cornell had entered the top five after starting in row five by the time a caution flew for debris on lap 17. On the restart, he passed two cars to move into the third spot. McCarl was back in traffic when the final caution flew for Wyatt Wilkerson, who got into the turn four wall with seven to go.

McCarl would not be headed in his quest for the big check. He was followed by Williamson, Cornell, Martin and Hickle. Ramey, Cody Wehrle, Josh Schneiderman, Paul Nienhiser and hard-charger Ryan Jamison rounded out the top ten. Wehrle, McCarl, Wilkerson and Martin won heat races. McCarl took the Dash and Miller claimed the B.

“I feel fortunate to have a good racecar and a good family,” said McCarl in Victory Lane. “I have to say thank you to the folks at 34 Raceway. This has always been one of my favorite tracks, and my Dad’s (Lenard) too. I appreciate all their hard work. It was a great racetrack, and you could go about anywhere on it. Old guys like me like it slick, the young guys like it faster. When they get technical like this, a little experience comes into play. I didn’t know what to do with the car. I hooked it up a little bit, and it slicked off right to us.’

“This has been a really special year,” said Cornell about his championship with the Fossil Racing #26 team. “When the year started, none of this even existed. Tony Moro and Marty Howard kind of collaborated on this and getting something together. We didn’t have a truck and trailer or anything. We pieced it together. Marty has always been an avid supporter of sprint and midget racing, and never owned a sprint car. I didn’t know who he was, and he didn’t know me. Lee Nelson introduced us, and we shook hands. We came out to have fun. We went out the second night and won, and had a few podiums. To win the driver championship and be second in owner points was really great. I can’t thank everyone involved with this team enough. It’s been really, really special. Hopefully, we can be back next year with these same partners.”

The Sprint Invaders complete their season Sunday night, September 26 with a $2,500 to win non-point event at East Moline Speedway in East Moline, Illinois. For more information on the Sprint Invaders, visit www.SprintInvaders.org or look us up on Facebook.